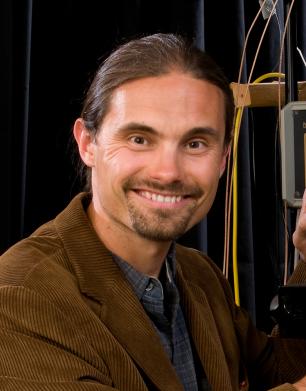 Lukas Chrostowski received his BEng in Electrical Engineering from McGill University in 1998, and a PhD in electrical engineering and computer science from the University of California, Berkeley, in 2004. He joined the Department of Electrical and Computer Engineering, University of British Columbia, in 2005, and promoted to full Professor in 2015.

With research interests in silicon photonics, optoelectronics, high-speed laser (VCSEL) design, fabrication and test, for applications in optical communication systems and biophotonics, he has published more than 200 journal and conference publications. He co-authored the book “Silicon Photonics Design” (Cambridge University Press, 2015).  Dr. Chrostowski was the co-director of the Advanced Materials and Process Engineering Laboratory (AMPEL) Nanofabrication Facility (ANF), 2008-2016.  Dr. Chrostowski is the Program Director of the NSERC CREATE Silicon Electronic-Photonic Integrated Circuits (Si-EPIC) training program in Canada, and has been teaching numerous silicon photonics workshops and courses since 2008.  Chrostowski received the Killam Teaching Prize at the University of British Columbia in 2014.  He was an elected member of the IEEE Photonics Society 2014-2016 Board of Governors and serves as the Associate VP of Education.  He was awarded a Natural Sciences and Engineering Research Council of Canada Discovery Accelerator Supplements Award in 2015.

Students interested in getting hands-on experience in the design and test of silicon photonics devices may consider the new online course – Silicon Photonics Design, Fabrication and Data Analysis – offered on edX, the graduate nanophotonics course (EECE 584), and the SiEPIC workshops.