» Home » Work with a Purpose: AbCellera Hires Talented People who want to make a Difference

Work with a Purpose: AbCellera Hires Talented People who want to make a Difference 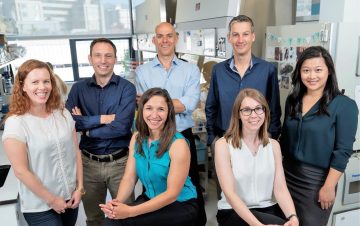 You might already hold the cure for flu or dementia. How? Your body makes billions of unique antibodies and one of these could be the basis for a treatment. But, how do you find that one rare therapeutic antibody buried in the proverbial haystack?

AbCellera, a local biotechnology company founded at the University of British Columbia (UBC), has developed a new method that can search immune responses more deeply than any other technology. Using a microfluidic technology developed at UBC’s Michael Smith Laboratories, advanced immunology, protein chemistry, performance computing, and machine learning, AbCellera is changing the game for antibody therapeutics.

In 2012, AbCellera started with only six members. The company has grown to over 75 employees who contribute expertise in diverse fields such as computational and data science, cell biology, protein chemistry, and biophysical engineering. This interdisciplinary team is crucial to the discovery of each antibody screened at AbCellera.

Protein scientists prepare the production of antigens to screen for antibodies with the right binding properties. These antibodies are selected from millions of antibody-producing cells using microfluidics, biochemical assays, robotics, and machine learning. Afterwards, next-generation sequencing is used to read the genes that code for the antibodies. Making sense of the huge datasets that are produced from millions of cells requires high-speed computation, bioinformatics, and some next-level visualization of the resulting datasets. Out of millions of sequences, only a couple dozen of the best will be expressed and evaluated for their ability to become a viable treatment.

From start to finish, the process of antibody discovery can be done in five days, compared to the three months required for conventional techniques. This technology could drastically speed up the drug discovery process for AbCellera’s impressive list of partners and for patients suffering while they wait for a cure.

According to Dr. Carl Hansen, Director and CEO of AbCellera, the company has a rather unconventional hiring philosophy. In addition to drawing talent from obvious programs like biotechnology, AbCellera recruits from electrical engineering, computer science, finance, and management. The company’s broad recruiting strategy has attracted some of the best talent at UBC.

“In British Columbia, we have world-class science and expertise, particularly in genome science, stem cell research, engineering, and computation…[but] there’s not a huge biotech sector in Vancouver,” says Hansen. “So, if you were to take a classic hiring approach and hire people who have only had years of experience in pharma and biotech, you’d be overlooking a lion’s share of the great talent we have locally.”

Hansen continues by describing the ideal candidate as someone “who has passion, can learn quickly, and is interested in being a part of something that’s growing and at the cutting-edge. Someone who wants to make an impact.”

Not only is AbCellera impacting the way antibody therapies are developed, but its booming business is creating jobs in British Columbia’s up-and-coming biotechnology sector. Recent biological breakthroughs, increasing application of powerful computation, and an influx of capital, have created a fertile ecosystem for world-changing discoveries. It will be exciting to see what the future holds for biotechnology in British Columbia, and for rapidly growing companies like AbCellera.