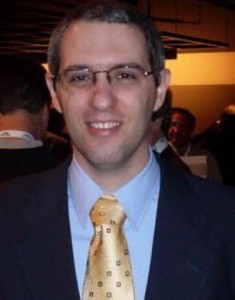 Dr. Yair Linn received his B.Sc. (with honors) in computer engineering from the Technion Israel Institute of Technology, Haifa, Israel, in 1996. In the years 1996-2001 he was employed as an electrical engineer in the Israeli Ministry of Defense, where he worked with the development, implementation, and deployment of wireless communications systems. From 2002-2007 he completed the Ph.D. degree in electrical engineering at the University of British Columbia, Canada. In 2008-2010 he was a visiting professor in electronic engineering at the Universidad Pontificia Bolivariana and also at the Universidad Industrial de Santander, Colombia. From 2010 to 2012 he was an ASIC and FPGA DSP design engineer in the semiconductor company PMC-Sierra in Burnaby, BC, Canada. He is currently a research engineer at TRIUMF, Canada’s National Laboratory for Particle & Nuclear Physics.
Dr. Linn was awarded the Jean MacDonald Graduate Fellowship scholarship as a winner of the University Graduate Fellowship competition at UBC in 2002. In April 2003, he was awarded a postgraduate scholarship by the National Sciences and Engineering Research Council of Canada (NSERC), as a winner of the 2003/4 NSERC Postgraduate Scholarship Competition. In April 2005, he was awarded an NSERC Canadian Graduate Scholarship as a winner of the 2005/6 NSERC Postgraduate Scholarship Competition. In November 2005 he was awarded the Bell Canada 125th Anniversary Graduate Scholarship.
Dr. Linn’s research interests include synchronization in wireless receivers, estimation of wireless channel parameters, and implementation of real-time digital signal processing algorithms in FPGAs and ASICs.